And Keeping It That Way

If there’s one room you wish you could just keep the door closed and never look at again, it’s probably your kid’s room (Or maybe your basement, or your closet……OK, there are lots of rooms) But thanks to toys, books, clothes, and crafts, children’s rooms can feel particularly disastrous – especially since a certain little guy or gal never seems to be keen on keeping it tidy. Here are some great tips from GoodHousekeeping.com to help navigate these problem areas.

Just because this blog is about de-cluttering and organizing a kids room, doesn’t mean you can’t take some of these ideas and run when them in other areas of the house. 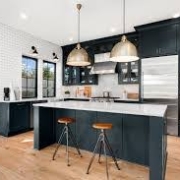 10 Tips for Organizing Your Kitchen
0 replies

Want to join the discussion?
Feel free to contribute!

10 Tips for Organizing Your Kitchen

7 Easy Tips to Organize The Bathroom
Scroll to top